Game Tables in the Wild

We think our game tables speak for themselves, but here’s what other people have to say about them. Companies and people you may have heard of, like Fantasy Flight Games/ Asmodee North America, Geek & Sundry, The Gamers Series, GeekDad.com, and more. Here’s a collection of reviews of our Carolina Game Tables from out “in the wild!!!”

Our friends at FFG ordered two Streamers, actually! We can’t wait to see both in regular action.

You may note the Star Wars Streamer Game Table is wrapped in a scenic vinyl overlay. That’s their choice, and we think it looks great! We’ve had people ask if that is a service we can provide, and the answer is no. It’s far cheaper for you to handle it once you have the table yourself.

“FFG Live needed a high-quality platform to showcase our hottest games, and Carolina Game Tables delivered in spades. Their Streamer Game Table is designed and crafted with thoughtful modularity from top to bottom, and its formidable presence is the ideal marriage of form and function—the perfect centerpiece for a tabletop gaming livestream. And to top off their amazing craftsmanship, Jodi and the Carolina Game Tables staff have been fantastic to work with.” –Ryan Thompson, Media Department Manager for Fantasy Flight Games

Welcome, new Streamer! Paizo, the creators of Pathfinder and Starfinder RPG among other related products in the tabletop game industry, has our newest Streamer on their set! Subscribe to their Twitch channel here: https://www.twitch.tv/officialpaizo/

Jordan Callarman and Jordan Pridgeon from Saving Throw host hilarious mock reviews from a… different point of view. In this review our Streamer Game Table takes on Todd’s Card Table and loses. In our defense, we’d like to note the Streamer Game Table comes with a two piece top for dining, so Dom Zook needn’t get so upset about the Jordans eating on it. But his beard does bristle. 🙂

Indigo and Croog talk about their experiences ordering a Streamer Game Table from Carolina Game Tables—the pros and cons.

Indigo said “I 110% recommend them” and Croog said “The product is awesome. They’re very communicative, and I think those are the two most important things. They walk you through the process well and at the end of the process you have the thing you want. None of this was surprising to me. This is what I read about, and this (table) is chill. It works well.” 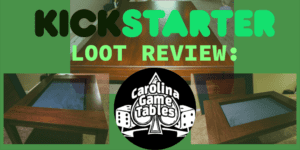 “While simple, the table is sturdy, well-joined and beautiful. we chose the cherry finish with dark blue felt, making for a rich, dark combination. The 3-inch deep play area accommodates most games well, and you can replace the solid top while the game is still deployed.” 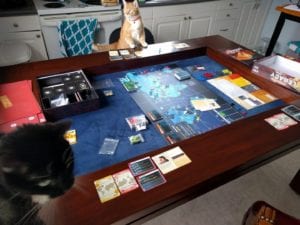 “The table far exceeds our expectations. It’s gorgeous, with a shiny finish. It’s so heavy that I can barely lift a corner by myself, which, to be fair, isn’t saying much as I’m a skinny nerd, but the point remains. It’s extremely sturdy, and could easily withstand all the leaning and stress a high action board game could bring on it. The lid covers the entire table, and looks amazing in our kitchen. Almost too amazing. A table this nice deserves far better decor.”

“I don’t always game on a mahogany table custom-crafted for a tabletop enthusiast’s unique needs by the folks who make Deadlands and Savage Worlds. But when I do, it’s a Carolina Game Table.”
—Mike Fehlauer, Vice President, Penny Arcade 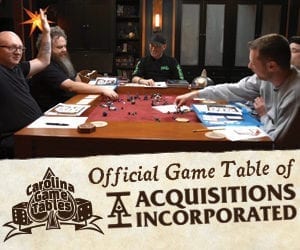 The Gamers: The Series

“The only sad part about shooting “The Gamers” around a Carolina Game Table is that it makes us want to shut down the cameras, grab our dice, and just play.”
—Ben Dobyns, Executive Producer of The Gamers Series 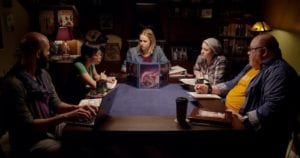 Game the Game on Geek and Sundry’s Twitch Channel

“Our Streamer from Carolina Game Tables is a fan favorite. Not only does it look lovely on camera, but we enjoy the ability to mount cameras on its ends without having to mount any special equipment. We have two (Kitchen and the Streamer) in the studio for two different shows. It’s very much a centerpiece of our programming”. 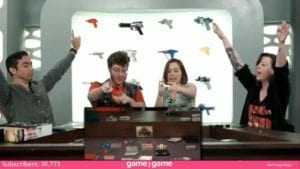