Every time we opened the Cabinet Game Table at Gen Con, traffic stopped in the aisles. We take that as a pretty good sign, but the real proof will be when our Kickstarter launches in September. In this post we have more on the Cabinet design(s), Kickstarter, a Game Table special offer, and a brief look at future designs we have planned.

This week we take the Cabinet and other tables to Dragon Con in Atlanta, GA! Find us on the third floor of the AmericasMart, booth 813. And if you’re interested in our Cabinet prototype…we’re selling it there at a discount. Serious buyers please email [email protected] You will need to be able to take it away from the floor on Monday evening after the show ends. 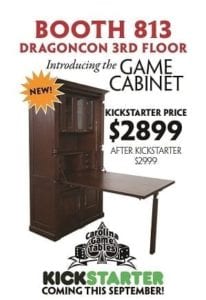 We are not offering our game table designs as Kickstarter reward options. We are offering a special, starting now and lasting until mid-October (or until supplies run out): gold cup holders! 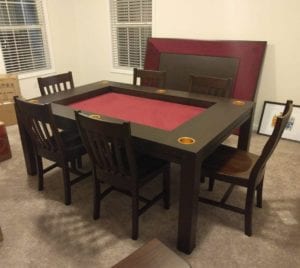 To take advantage of this option, simply order a Dining Game Table, Streamer Game Table, or Tablezilla with cup holders from www.CarolinaGameTables.com and note “gold cup holders” in the comments at checkout.

We plan to run a 2 week long Kickstarter, completing near the end of September.  Be sure to sign up for our e-newsletter so you’ll know when we launch! Based on the pledges we get from Kickstarter we can extrapolate whether the design is marketable. What we are not interested in is overextending ourselves in a direction which hurts our brand or our company.

Our goal is $20,000: that’s just seven Cabinets. If we get seven Cabinet pledges during that two week time, we know we’ll sell enough of that design per year to move forward with implementing the manufacturing process. If not? Well, Jodi and Clint get a cool Cabinet. 🙂 And we move on to our other design plans.

We’re making a few small changes to the overall Cabinet Game Table design since working with the prototype (how the table latches at the top of the cabinet, where our logo plaque is fixed, other small details like that) and based on feedback from people at Gen Con. Thank you to everyone who stopped and consulted with us!

We heard some people want the Cabinet with Doors instead of the table. That won’t change the manufacturing process significantly; it’s the same price as the Cabinet Game Table (similar to how we offer the Dining Game Table as a one piece or a two piece table top—you choose, no upcharge, keep it simple). We only need to meet the goal of seven of the two designs combined in the Kickstarter; not seven of each.

We’ve also heard that some people would prefer no Table or Doors, so we plan to have a Game Cabinet (No Doors or Table) option, too. We’re investigating whether that will change the price.

Ship your Cabinet and Game Table Together!

White Glove Delivery brings all the furniture to your home at one time and puts it where you want it (that Cabinet is solid and heavy). Order your table from our website and the Cabinet through Kickstarter. We arrange White Glove Delivery after all pieces are completed anyway, so you have plenty of time to tell us Ms. Smith’s Table and Rambo19’s Cabinet ship to the same address.

Don’t worry if your table finishes a few weeks before the Cabinet. Normally that incurs a warehousing fee, but this is due to our Kickstarter. We’ll cover the warehousing fees.

Delivery is currently only available for the 48 contiguous United States. We’re still working on shipping options to other locations, but nothing is viable yet.

What other designs does Clint have turning about in the brainpan? Quite a few! We don’t want to give too much away quite yet, but we will say this. If we surpass our goal rather quickly, we can move on to those other designs faster. The most common requests we hear are for our game tables at counter and bar height. We also have requests for a game table with a 6 x 4 play area (that may not be feasible with our table design, but we won’t know until we can seriously look at it). So if the Cabinet Game Table Kickstarter goes well enough, those designs can fast track, too.

Even if the Cabinet is not your thing, we appreciate you sharing the news about our Kickstarter. To test the market the best way we know how, we need to reach a LOT of gamers. Thank you!

Gen Con 50 and a New Kickstarter!

Our Next Kickstarter Launches in September!

Well, we have a design for a very different kind of product. It’s a cabinet specifically designed to hold games. Board games, role playing games, card games—most kinds of table top games.

The upper shelves are sized to hold board game boxes up to 320mm  x 240mm (about 12.5″ by 9.5″, the size of Settlers of Catan, Flash Point Fire Rescue, and similar boxes). The glass doors can also show off a collection: painted miniatures, signed cards or games, etc.

The open shelf below is designed for game boxes up to 12″ x 12″ (like Seven Wonders, Ticket to Ride, and King of Toyko).

Beneath that are three small drawers on either side for smaller games or accessories like dice, pencils, and the like. In between the drawers is an open bookshelf for books up to 11″ tall (like 8.5″ x 11″ roleplaying game manuals).

All of that can be enclosed by the top door (more on that in a second) while underneath are two more larger drawers and a storage space for games packaged in bigger boxes.

Oh yeah, and that top door is false. It folds down to become a small two or three person game table! 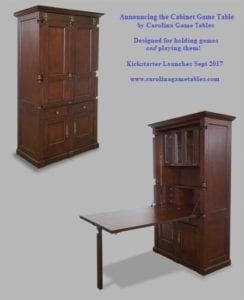 Kickstarter in September! The Cabinet Game Table, shown here as a 3D render in Cherry finish.

Yep, our Game Cabinet is actually a Cabinet Game Table!

Like our other tables, it’s multi-purpose (but unlike them, it won’t have a drop-down play area, just a flat table surface). We think it’s great for games, snacks, crafts—a lot of things! And it can be tucked away when the cabinet is “closed,” making it a great addition to any game room, dining room, or wherever you need a spare table sometimes.

We’re using Kickstarter for this new style because we need to know we will have viable sales for this design before we commit to all the set-up necessary to put it into production in the factory. (To receive our news in your inbox—like when the Kickstarter launches—subscribe to our e-newsletter here)

This cabinet is very different from our other products, and if we can’t reach a minimum during the Kickstarter time period, it very likely won’t be viable extrapolated to the long term. The last thing we want to do is put time and money into a product that isn’t feasible.

See the Cabinet Game Table at Gen Con! (we hope)

We hope to have a prototype ready in time to bring to GenCon in Indianapolis. It’s a bit touch and go right now, but we believe we’ll have the new piece on display at Gen Con—the same place we debuted our Dining Game Table two years ago.

If you’re at the convention, please stop by. Even if we don’t have the prototype, we’ll have information on it and the Kickstarter.

Find us with Studio 2 Publishing in Space# 2029. We’re the corner booth on the aisle. You can also see our tables at the Mayfair Games and Lone Shark Games booths. Mayfair is running demos on a Kitchen Game Table and Lone Shark as well on the Streamer Game Table. [See the map below for those locations.]

We hope to see many of you there. It looks to be an amazing and exciting 50th Gen Con in 2017.

Thanks for making all this possible!
Jodi and Clint